What Do Hotel Execs Really Think Of Airbnb?

What Do Hotel Execs Really Think Of Airbnb?

Airbnb hung in the air over most major hotel companies’ third-quarter earnings reports last week, and analysts weren’t shy about asking hoteliers to expound on what effect the sharing economy platform and its rapidly growing supply could have on the industry.

“As we’ve talked to our corporate clients, we don’t see Airbnb as a particular threat,” Starwood Hotels & Resorts CFO Tom Mangas said. “Maybe [Airbnb’s] business model evolves. Given the kind of services that we’re providing at our hotels and what we believe our corporate clients want, we believe that’s a low-risk threat to our business.”

Mangas’ comment rang familiar to other statements hotel executives made this week. Hilton Worldwide CEO Chris Nassetta said the company believes a large portion of Airbnb’s business is incremental. “The bulk of the demand is in higher-rated, high-occupancy, urban markets; it is longer length of stay with a predominantly leisure and value focus and stay occasions where customers are willing to accept inconsistent product with very limited services,” Nassetta said. “We do not believe there is a material impact on the bulk of our markets or with our core business and leisure customers. As we speak to our largest corporate clients, we are confident that Airbnb will not satisfy a meaningful piece of their demand.”

Extended Stay America CEO Gerry Lopez told analysts he’d used Airbnb in “prior lives” and the platform is not a threat to the 30-day-stay segment. It’s worth noting, however, that the company wants to shift to shorter-term, higher-rated stays.

Airbnb has been a player in the alternative lodging space since 2008, and though the company has kind-of, sort-of been part of the corporate travel conversation, it moved directly into the managed travel space in July when it launched Airbnb Business Travel. The platform—which provides travel managers with improved visibility and central billing capabilities, among other tools—has opened the door for travel programs that might otherwise have resisted Airbnb.

“As much as Airbnb makes me nervous, it’s a platform that we’re looking at and researching to see how they would fit into a managed corporate travel program,” said Trish Rothman global travel manager for William Blair. “They’re already doing a lot of things that are trying to partner with us as a managed travel program; they’re putting in security things. They’ve got International SOS that is linked to them on the back end. … In cities like San Francisco, it’s impossible to get a hotel room, so you have to have an alternative if you want to do business in some of these cities.”

After signing an agreement with corporate housing provider BridgeStreet Global Hospitality in October, Airbnb continues to grow its professional inventory.

“Airbnb is no longer sleeping on somebody’s couch,” said PKF Hospitality Research senior managing director Mark Woodworth. Airbnb offered about 250,000 units daily in the United States last year, and Woodworth estimated that about 70 percent of that inventory competes with hotels. The competitive factor is whether a rental offers an entire apartment or house as opposed to shared space.

Nowhere is the potential effect of Airbnb supply on the hotel market more evident in the United States than in New York City, which offers nearly 13,500 active Airbnb listings in Manhattan—one of the city’s five boroughs—alone. That dwarfs the inventory of Los Angeles (8,266), San Francisco (5,530) and Chicago (4,661). Airdna, a Santa Monica, Calif.-based firm that analyzes Airbnb data, reported that entire-place rentals comprise 64 percent of the borough’s listings figure.

At the same time, hoteliers in the city have struggled to raise rates in recent years in spite of record-level occupancy. The average daily rate in the United States grew 4.7 percent during the first three quarters of 2015, according to STR. In New York City, though, ADR was actually down 1.4 percent. Meanwhile, supply grew 3 percent year over year, higher than the national rate of 1 percent, according to STR. What that 3 percent figure doesn’t take into account is the growth of Airbnb, an entity that Woodworth said has the hotel industry “punching at phantoms.”

“If it wasn’t for Airbnb we would be seeing rate growth much stronger than what we are seeing,” Woodworth said. “I can’t prove that; it’s only intuitive at this point, but it makes sense.”

New York’s environment may actually spell good news for buyers. Travel buyers have told GoldSpring Consulting partner Neil Hammond that hoteliers are requesting a small, 1.4 percent increase in rates from last year, and some even are reducing rates from previous years. Others are proposing last room available rates, which have proven increasingly difficult to get during negotiations. “We know capacity has been added to this market, but these results were a pleasant surprise,” Hammond said.

Though the hotel executives who responded to Airbnb questions during their earnings calls largely rebuffed the idea that the provider would threaten them significantly, at least in the corporate market, they weren’t entirely dismissive.

“Airbnb is real. It’s here to stay,” said Starwood interim CEO Adam Aron. “The hotel industry has some issues with Airbnb on things like collecting accommodations tax and other issues, but we all have to accept that the shared economy is part of the way the world will work in the 21st century. The world’s hospitality industry is large enough that it can accommodate Airbnb as a major player, as there are dozens of major players in the world’s hotel industry today. And we—not only Starwood but anyone in the industry—will be able to be a strong competitor even with Airbnb alongside.”

Nassetta sang a similar tune, stating there is “every ability for us to coexist.”

“I suspect over time, investors, everybody, will see it for what it is, which is a really good business but a business that is largely distinct from what we do,” he said. “There is every opportunity for both of us to have really successful business models.”

Lopez said Extended Stay America would see whether Airbnb will be a competitor or a potential distributor for the company in the future. 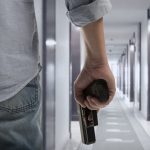 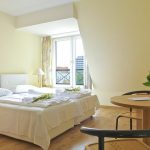